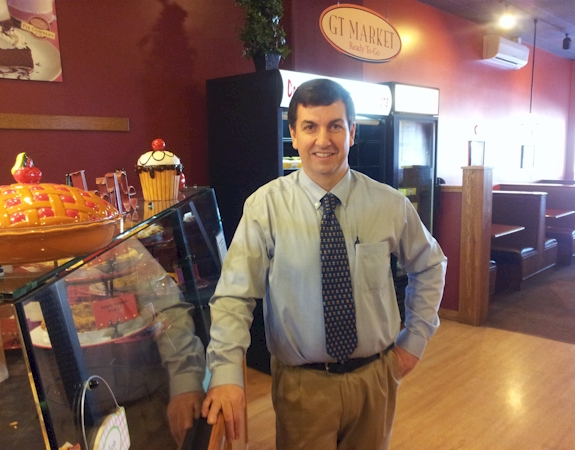 Almost everyone referred to Mike McLaren as “m2”, which was appropriate considering how passionate he was about numbers.

A math teacher at Grand Blanc High School for more than 35 years, McLaren had a special relationship with his students that transcended the classroom. Among those students were Scott Byrd and his wife Jennifer, who now own the Grand Traverse Pie Company in Petoskey. In early March, the Byrds served pie from their shop at McLaren’s memorial service, honoring a request from their former teacher.

“When his health was failing, Mr. McLaren asked me if I would serve pie at his memorial service,” Scott said recently while manning the front counter at his pie shop in northern Michigan. “He served pie on National Pi Day in his classroom for as long as anyone could remember.”

McLaren passed away on February 14, prompting an outpouring of responses from former students and colleagues. Scott and Jennifer attended his memorial service in Grand Blanc to fulfill their promise to McLaren, but they got something more than they expected, and they plan to pass it on.

“Another former student spoke at the service and mentioned that they had given Mr. McLaren a “Pi” tie some years earlier. Mr. McLaren would wear that tie on Pi Day when he served pie in his classroom,” Scott said. “When Jennifer and I left the service we opened a gift bag and card that were given to us by Karen – Mike’s wife – and inside was the Pi tie. I will wear that tie in my pie shop this March 14 in honor of my former teacher.”

March 14 (3/14 or 3.14) is recognized as National Pi Day, a holiday celebrated enthusiastically by educators and mathematicians. But it’s also a great excuse to eat pie. Many teachers take their kids to the Grand Traverse Pie Company to celebrate the “geeky holiday” that pays honor to Pi – defined as the ratio of a circle’s circumference to its diameter.

“We have teachers come to our shop every year and we hand out pie,” Scott said. “It’s sort of a field trip for them.”

Byrd has operated the GT Pie Company shop in Petoskey since 2006. This year on March 14, Pi Day will have a special meaning for him and his wife.

“It was a rewarding experience to be able to serve pie at Mr. McLaren’s service,” Scott said. “[For him] teaching was everything. He didn’t have any hobbies or children of his own, and he committed himself to teaching. He connected with his students, and he cared about us.”

Visitors to Byrd’s pie shop in Petoskey on March 14 will receive a free slice of pie (made with real Michigan fruit) with any purchase. And they’ll get to see Mr. McLaren’s “Pi tie” in person around Scott’s neck.