At Grand Traverse Pie Company, our passion is to create memorable moments while sharing pie. We wanted to share this story with you as it is such a heartfelt story and we feel it shows the Power of Pie. We hope it brings a smile to your face just as it did to ours.

Recently we had a guest who was visiting Traverse City stop in to our office. This guest, Richard Allen, is a faithful shipping customer who shares our pies with medical facilities in the south to help create a conversation and open doors for his business, Cloverland Drugs. 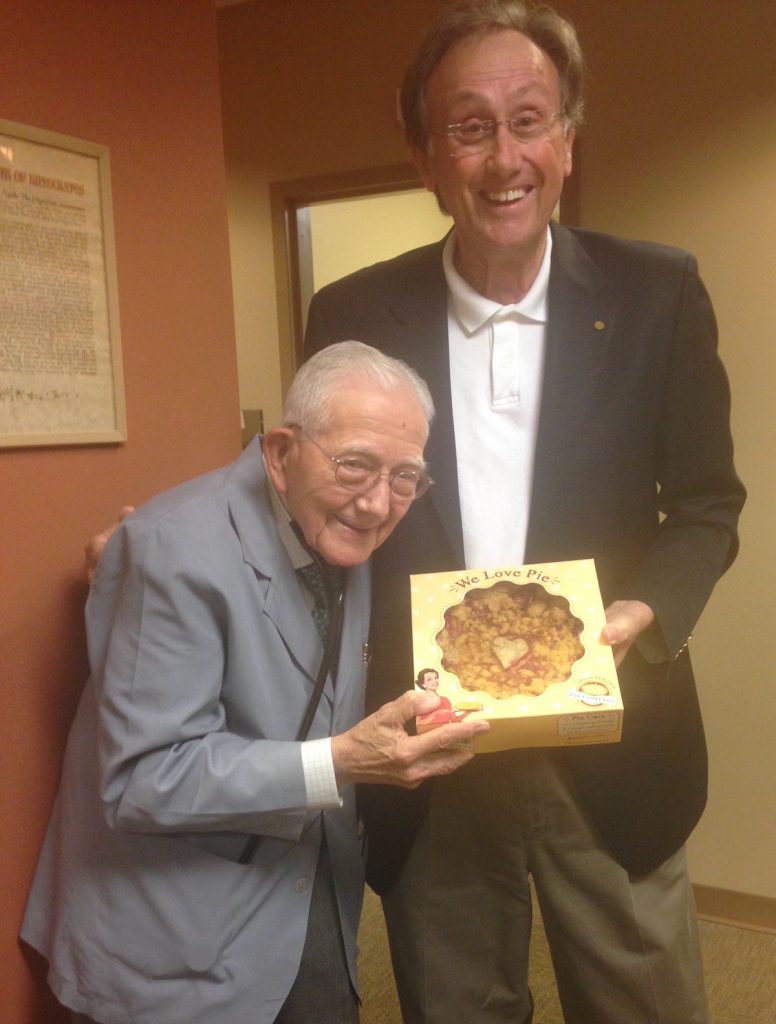 During Richard’s visit, we ended up talking about a man, Dr. James Temple, who Richard says is an icon in his community in Alexander City, Alabama. Dr. Temple is a local doctor of 88 and is remarkably still practicing four days a week. On his off day, he makes rounds to nursing homes.

Dr. Temple opened Temple Medical Clinic in 1960 and has been a physician in his community for more than 55 years. He has treated generations of families. Dr. Temple told the Alex City Outlook in an interview, “I just love people, and I like to see them get well. I like to solve their problems.”

While in Traverse City, Richard picked up a cherry pie just for Dr. Temple. He drove this pie from our shop all the way to Dr. Temple in Alabama, because Dr. Temple told Richard that pie from Grand Traverse Pie Company is the best pie he’s ever had. Richard recently presented the “Perfect Pie” to this truly inspirational man and sent us this wonderful photo.

We were curious how Richard, who lives in Alabama, began giving pies from Grand Traverse Pie Company.

Richard’s daughter, Amy Hall, in the Traverse City area tells us how this whole story got started. “I’m from California, which is where I met my husband. His family used to vacation in Traverse City and had a farm that sold cherries from a farm stand on the road. When we moved here five years ago I went to the Grand Traverse Pie Company to find Cherry Pie to send to my father, Richard Allen, in Alabama. Well, he loved it! So much so that he now purchases the pies for his business to give to doctors’ offices he calls on, he tells me that has been a real door opener!”

In fact, Richard Allen of Cloverland Drugs, has been sending pies to clients since 2013. “My daughter, Amy – she got me started,” Richard says. He sends his personal favorites – the Grand Traverse Cherry Crumb and the West Bay Blueberry Crumb – each with a custom clover made from pie crust baked on top. ”I’ve sent a number of pies to other states and have had great reviews!”

With new clients or beloved legends, Richard is sending pies and warming hearts. Thank you for the smiles, Richard and Dr. Temple!

2 thoughts on “Richard Allen and the Power of Pie”