For the fellow Blueberry Pie lovers out there, there’s a whole day dedicated to you. National Blueberry Pie Day is celebrated annually on April 28th! To celebrate the holiday, we gathered a few fun facts about blueberries and blueberry pie to please hearts and appetites.

Stop in and celebrate with a slice of our homemade Blueberry Pie made with Michigan Rubel Blueberries (and maybe even add a scoop of vanilla ice cream).

3.  Most of Michigan’s blueberry farms are in West Michigan in the Lower Peninsula along Lake Michigan. The sandy soil and climate, moderated by the lake, are perfect for growing berries.

4.  Michigan has about 21,000 acres dedicated to growing blueberries. 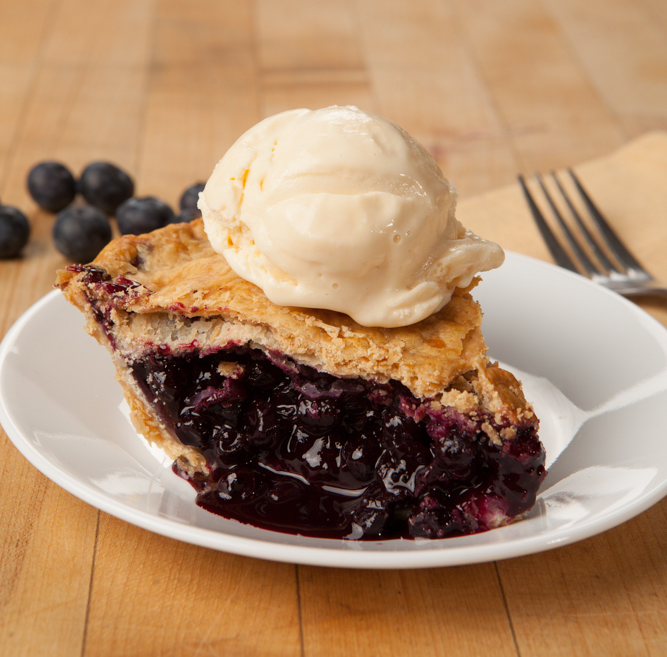 5.  People have been eating blueberries for more than 13,000 years.

6.  Blueberries were called “star fruits” by North American indigenous peoples because of the five-pointed star shape that is formed at the blossom end of the berry.

7.  The blueberry is one of the only foods that is truly naturally blue in color. The pigment that gives blueberries their distinctive color—called anthocyanin—is the same compound that provides the blueberry’s amazing health benefits.

8.  Blueberry Pie was brought to the United States by settlers from northern Europe and Scandinavia. The first blueberry pie recipe was documented in the Appledore Cook Book in 1872.

9.  Between our 15 Grand Traverse Pie Company shops, we used an astonishing total of 134,520 pounds of blueberries last year.

10.  National Blueberry Pie Day is celebrated each year on April 28th to honor one of America’s favorite desserts. YUM!