In this video, The Food Network looks at the success of the Grand Traverse Pie Co., the bakery and cafe which started in Traverse City, MI, by Mike and Denise Busley, and has grown to more than 16 stores in the Midwest.

Where’s the most beautiful place in America? ABC’s Good Morning, America asked people to submit entries and vote for their favorite location. The winner? The Sleeping Bear Dunes National Lakeshore Park about 25 miles west of Traverse City, Michigan. The park, nestled majestically on the shores of Lake Michigan, feature the “dunes at Sleeping Bear, (more)

If you’ve been walking near Front and Park streets in downtown Traverse City since early May your nose has been treated to scintillating aromas wafting from Grand Traverse Pie Company’s new bakery and café. Had you have taken a moment to read the sign over the entrance before rushing in to sample one of their (more)

The Grand Traverse Pie Company has been recognized by FastCasual.com as one of their 2011 Top 100 Movers and Shakers. GT Pie is ranked #67 on the list and is also featured as one of the restaurants that hit the “after-meal” market. Fast Casual’s 2011 Top 100 Movers and Shakers ranks the restaurant-industry segment’s best (more) 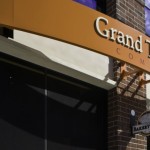